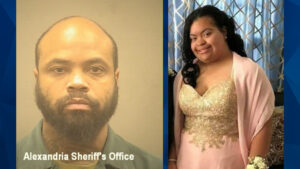 Police in Alexandria, Va. have charged 40-year-old David Cunningham in the gruesome death of his neighbor Melia Jones, a 23-year-old woman with down syndrome who was living on her own for the first time.

According to the Washington Post, Jones’ parents found her body wrapped in blankets three days after she was killed on Dec. 4. She had been sexually assaulted and strangled and had a bag over her head when she was found.

In addition to the indications of violence shown on the body, police officers who first arrived at the apartment reported finding signs that someone had attempted to clean the crime scene.

Cunningham’s DNA was found all over the apartment and even under Jones’ nails. He has been charged with a single count of second-degree murder and is being held without bond.

His attorney Damon Colbert says Cunningham had good reason to have been in Jones’ apartment: the two had become friends in September and were involved in romantic relationship.

“This is a genuine whodunit,” Colbert said. “Because he was in her unit, they’ve now pinned this on him. This man should be allowed to go back to the community … to fight for his life.”

While the defense attorney says his client gave consistent testimony during a 5 1/2 hour long interrogation, Parcham says Cunningham’s statements were inconsistent. Particularly when asked about the nature of his relationship with the victim.

Cunningham, an admitted crack user, blamed the variations in his statement on drug and alcohol.

Jones worked in customer service at Reagan National Airport, where she had been recognized as employee of the month twice, NBC Washington reports. The apartment where she was killed was the first home she had lived in alone.